Post images from recent spotting trips, your accepted photos on Airliners.net and JetPhotos.net, or get pre- and post-screening advice.
Note
For help adding images or videos, read "How to embed media / guidelines".
Post Reply
235 posts

Moose135 wrote:Thanks, Cary! We have been getting the DL A220/CS100 in and out multiple times in the past couple of weeks. When I went down to get the Antonov, one had just departed. It was back again today, and while I missed the arrival, I was able to get the departure from the overlook at 18C.

The whole world (well, much of it) has descended upon Charlotte this weekend for the NBA All-Star Game. The ramp at the Wilson FBO is overloaded with bizjets, and I shot this BBJ parked over at the cargo ramp. It is N834BZ, registered to JET FORCE V LLC out of Fresno, CA but it appears it is being operated by charter operator Silver Air.

Here's a small portion of the stuff at Wilson.

Nice! I got that BBJ back when it was under a different reg:

We had our first visit by an Airbus A350 to CLT today. LH is shifting them to the daily Munich flight starting this coming Sunday, but they flew one in today for testing.

Very nice, but did LH Lady see this?

I'm sure she did. They landed 36C, so I skipped the overlook and went right to the parking deck, but I found out tower had them roll all the way down to the end, passing the overlook, so I'm certain she saw it.
Top

Moose135 wrote:I'm sure she did. They landed 36C, so I skipped the overlook and went right to the parking deck, but I found out tower had them roll all the way down to the end, passing the overlook, so I'm certain she saw it.

It must have been difficult for her. I hope she's able to recover from such a harrowing event

Following Tuesday's sneak peak, today marked the start of regularly-scheduled, daily A359 service by Lufthansa between CLT and Munich. They landed 36R and rolled to the end, so we were treated to some nice shots with the skyline in the background. ARFF was out again to give them a water salute.

We had a couple of interesting visitors in to CLT today! It was raining when I got down there after work, and they weren't parked in the best of spots, but you take what you can get!

They really don't want anyone to see the reg on N119NA, do they? If you ever happen to disappear, I'll know what happened

The Zero-G 727 has been in Charlotte the past couple of days.

This Atlas Air 744 brought the Jacksonville Jaguars in to play the Carolina Panthers on Sunday.

Someone likes that I have a Durango...

We had an interesting catch at CLT this afternoon, a Gulfstream G-IV which looks to be the Washington Redskins team plane. In addition to the logo, it's registered to DSWA LLC at Redskin Park Drive in Ashburn, VA. The team owner is Dan Snyder, and the team headquarters and practice facility is at that location.

Ron Rivera, who was head coach of the Carolina Panthers before being fired during the season, was hired by the Redskins in the off-season. We suspect he was using it for a trip home, as he still has a home in Charlotte.

Back in December, the Seattle Seahawks came to Charlotte to play the Panthers. They use Hawaiian for team travel, and we were able to catch it while it was in town.

That same day we caught the AA Astrojet arriving.

Caught a pair of Honeywell Gulfstreams one day in December as well. N922H is a G-VI, N599H is a G-V.

Monday it was 75 degrees and sunny, so I stopped by CLT after work. Got there about 10 minutes before the LH A350 was due in - light was perfect...and they landed 18L while I was at the Overlook.

Nice light on those, Moose! I'm getting antsy with all the clouds up here. There have literally been about 2-3 sunny days in the 3 weeks since I got back from FL, and only 1 of those was a weekend

That's what I get for letting my JetTip trial lapse into a paid account...I'm paying for info I can't even put to use

It's certainly been a strange time of late. I've been working from home since March 13, and we've had stay-at-home orders that covered Mecklenburg County (home of Charlotte and CLT) and later all of North Carolina since mid-March.

We took a ride out to the CLT Overlook on Saturday, March 21. The place was crowded, and it was a challenge to maintain appropriate distancing. We shot there for about an hour, made a quick trip to the Hourly Deck, then left. A couple of days later, the Overlook was closed when the stay-at-home orders took effect.

JetBlue E-190 flight from Houston to JFK dropped in to CLT when New York Approach was closed due to coronavirus.

We had some errands to run this past Saturday which took us near the airport, so we stopped in to see what was happening. The Overlook is still closed, but we did go up to the Hourly Deck. The deck has 7 levels, with the three lower levels reserved for rental cars. The top two decks were closed, so we parked on Level 5 and walked up to the top. Long Term and Daily parking is also closed, but the Hourly Deck was still fairly empty. In the hour or so that we were there, we probably saw three or four departures, and two or three arrivals.

A look at the RJ side of the house. There were lots of jets parked at gates, but I don't know that many were actually going anywhere.

A line of AA jets parked on the ramp next to the A-Concourse extension, near the 18C approach end.

Tails lined up at B-Concourse, with the AA maintenance hangar in the background, more jets parked there.

Yes, that's an AA 777 at the hangar. No, there wasn't anywhere to get a better shot. AA doesn't use the 777 out of CLT, but apparently they will start some flights in July. Last week, they were towing it to different gates to check spacing.

They are continuing construction on the main terminal, but I've never seen it with so little traffic.

More jets parked at the maintenance hangar. These are the ones in front of the 777 in the photos above, the 777 would be around the corner of the hangar to the left of the photo.

Lots and lots of AA jets parked down at the south cargo ramp.

Great coverage, Moose! I was at JFK (stayed in/next to my car to spot) recently, and it was averaging about 5-7 arrivals per hour (with half the planes landing on the other runway), so we have you beat

Today, the NC ANG flew one of their CLT-based C-17As around the state, doing flyovers saluting health care workers and first responders above a number of facilities. I caught them departing this morning. I was on the Hourly Deck (with about 20 other people, all maintaining proper social distancing) and they departed 36R, so the departure was backlit, but just before they rolled, they told tower they wanted to make an immediate left hand turn to the west, for their first flyover. 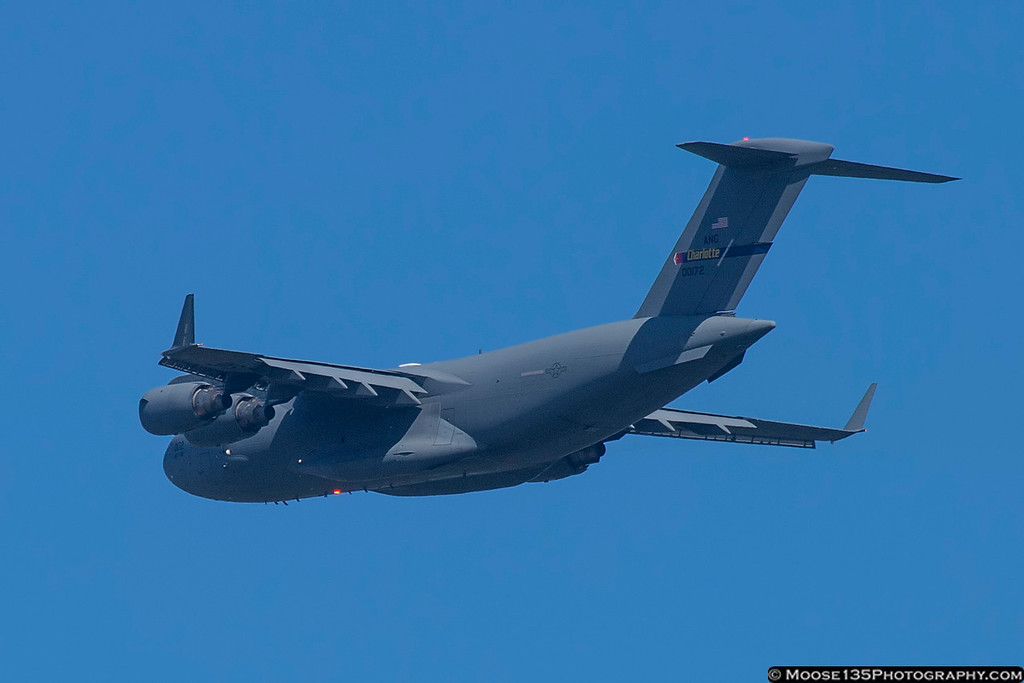 Not CLT directly, but CLT-adjacent if you will...

NASCAR resumed their season - with no spectators - a week ago with two races in Darlington, SC followed by two in Charlotte this week. On Sunday evening, they ran the Coca-Cola 600 at the Charlotte Motor Speedway, just two miles up the road from my place. Since it was a race already on the schedule (the two Darlington races, and tomorrow night's second Charlotte race were rescheduled from postponed events) and since it was Memorial Day weekend, they had a pre-race flyover scheduled.

We were supposed to get a USAF Heritage Flight group, with 2 P-51s, an F-16, and an F-22. Thunderstorms in the area threw a wrench into those plans, and we ended up with two F-16s and two F-22s. The F-16s were out of Shaw AFB, not too far away in South Carolina, and the F-22s were out of Langley, although one had Tyndall AFB markings, possibly one of the Raptors that evacuated ahead Hurricane Michael in late 2018.

The track was not open to the public, but we hung out in a parking lot across the street to shoot the flyover, then headed home to watch the race on TV.

Bell 206, owned by Helivision and based out of nearby Concord, provides aerial TV coverage of NASCAR races and other events.

That one F-16 has some sweet paint

That is a neat paint scheme - just wish we had better conditions to shoot it. If I ever go to another air show down this way, maybe I'll get a chance.